A couple days after my date with The Speed Dater, he texted to say he had a great time and wanted to see me again. This took two weeks to happen, due to his work schedule. Just what I need...another workaholic.

He met me at Westside Tavern after for dinner and a movie on Saturday night. Unfortunately, the movie was sold out so he bought us tickets to see Perks of Being a Wallflower. We had FOUR HOURS to kill before it started. So he suggested we go across the street to Gyu-Kaku instead. The wait was a little long, so we walked next door to The Wellsbourne for a drink. Oh great. This just turned into the same date I took The Busy Builder on for our fourth date. We went up to the bar and he ordered...a DIET COKE. Wait, what?

Five minutes later, I changed his name to Dick Downer.
Things that Dick Downer is allergic to:

"But you can order a drink," he said. That's okay. If I wanted to drink alone, I'd be in my pj's watching SNL. We walked into the restaurant and he panicked: "Does it seem safe to eat here? It looks dirty." Ummm...I laughed. I thought he was joking. He ordered for us without even asking me what I like, then dismissed himself to go wash his hands. [First text to friends: "Oh god. He doesn't drink."] He came back traumatized. "The bathroom is right next to the kitchen...and I don't think they're very careful about all that raw meat." He proceeded to wipe down our table. I laughed, uncomfortably.

We finally made it over to the movie theater, and I snuck away to the bathroom. [Second text to sister: "Wish I was with you. This date is bleh."] The moment we sat down, he lifted the armrest and reached for my hand. Interesting, since we had no prior physical contact. The movie started and well...it isn't exactly a romantic comedy. I won't spoil it, but you shouldn't see this film on a date. When the plot turned, he pulled his hand away. After the movie, Dick Downer added something to the list of things he hates:
He complained about its lack of originality, then complained about the $8 parking fee, and then complained about the parking garage. Just when I felt relieved to make it back to my car, he surprise-attacked my face. HE ATE MY FACE. And just like that, he was gone...and I wiped the saliva off my face and raced home. 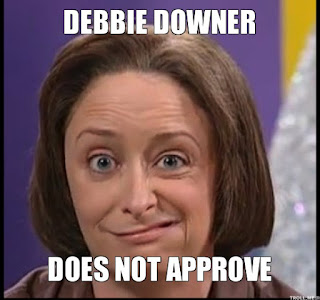 This is why first dates should last longer than thirty minutes...