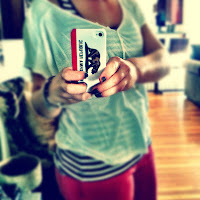 It's a little risky to go on a first date on Election Day. I didn't know if Ron Swanson also thought it was odd, but I went for it anyway. But he could be crazy conservative and bring up politics and we could start fighting. Or worse, Romney could win. What's the worst that could happen?

First impression: He's cute. Kinda scruffy (and kinda hairy) with pretty eyes and a big smile. He was wearing a red flannel, perfectly fitting for his Ron Swanson name. He opened the door for me. And then he tested me: "So, this place is beer and wine only." That's ok. I drink beer. (I passed)

We found some seats at one of the communal tables at The Tripel and he took the lead suggesting we split a few things. We have a very similar sense of dorky humor. I tried to remember more details about him, but when I went online to check his profile again before our date (to study) I noticed he deleted his account. Without me asking, he mentioned he's new to the site and got creeped out by some girl he didn't reply to that was checking his profile every day. Sounds about right. But damn....where is he from again? What does he do? How old is he?? Crap.

He's from Florida. When I asked why he moved out here, he said he wanted to work for Pixar...which is interesting since I wanted be a Disney Princess but they stopped making musicals. Lame. Also, he moved out here with a girl....HIS WIFE. His EX-wife. Deep breaths. I am actually okay with a divorcee. As my girl Patti Stanger would say, it's a sign that he's willing to commit. But as my mom would say..."as long as he's ACTUALLY divorced." Good points.

Half way through the date and I was feeling pretty positive about him. We laughed a lot, and I accidentally flung my fork across the table. Typical. Then President Obama was predicted to be re-elected. I looked at him and asked, "are you happy or sad?" We were both happy. Phew.

The bill came and he pulled out the credit card, no question. I did not offer to pay. Unfortunately for him, the waitress came back....DECLINED. This is awkward. He used a different card, and I could tell he was embarrassed. We left and he walked me back to the lot. I made him guess which car was mine and he said it would be very weird if I drove a cougar because that was his first car. I think that means I passed that test, too. As we said goodbye, he leaned in and I let him kiss me.

When I got home, he texted me that he had a really great time and wanted to see me again. He also made it a point to mention that his credit card number had been compromised, according to his bank. That's kinda cute. He didn't even realize I stole his identity when he went to the bathroom....muahahaha...just kidding.