I think my dog wants me to be alone forever. Instead of being cool and playing catch or wrestling with potential suitors, he's crying in the corner because his leg itches and now he's wearing a cone.

I might as well be wearing the cone myself.
I couldn't sleep because I could hear him sitting on his dog bed whining.
After feeling me tossing and turning, the guy finally says, "Just let him up. It's fine."

...And then we had a dog barrier laying between us. 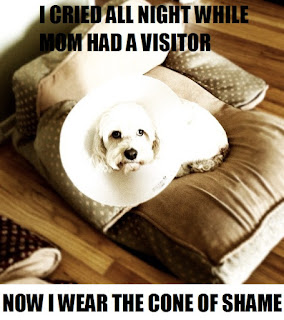 Labels: C-Block, Dealbreaker, This is Awkward