I lined up three different first dates. Some people accuse me of doing it for blog material, but truly I am a romantic. I want to fall in love. It just hasn't happened in a while, and I might as well go out and try to meet people. Also, I officially gave up on The Busy Builder. I've gotten a lot of messages from people rooting for that to work out, but the truth is...you can't MAKE someone like you.

I need some distraction, don't you think? And I actually got a little excited about Bachelor #2, a Jewish lawyer who wrote that he was six feet tall, and I actually believed it! We had a nice little phone conversation about a week before our date, and I felt like he and I would get along well.

The day before the date, the details hadn't been decided and my OCD planning anxiety took over. I texted him to see if we were still on. He called me right back. The Amateur seemed very cheery on the phone and then, "So I know we were set to go out tomorrow, but...I MET SOMEONE!" 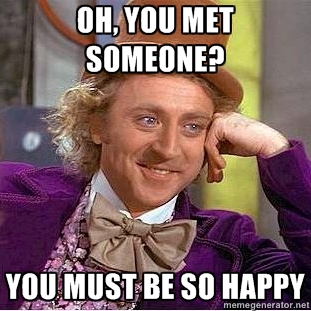 Oh, ok well cool. Good for you. He went on and on (and on and on) about meeting this great girl, and how he didn't think it was fair to her or me if he went out with me. Amateur. Let's do the math here. We've been talking for approximately 1.5 weeks. That means he met this girl within 10 days...and he's already limiting his options?? Amateur!

I was happy for him, and told him I understood. But he didn't stop there. He proceeded to give me dating advice. He said he didn't have much luck on dating sites. He suggested I go out to some of those singles mixers (the Jewy ones) since apparently that's where he met Miss Perfect. Thanks a lot, pal.


Welp, I got rejected before he even met me. That's a first.