You'd have to do better than Froyo for that!

After feeling like my dates were super safe and boring, I decided to go the opposite route...
I agreed to go out with a guy who was shirtless in his main pic, and he looked good.

Oddly, he invited me to Menchie's for froyo. Hmm. 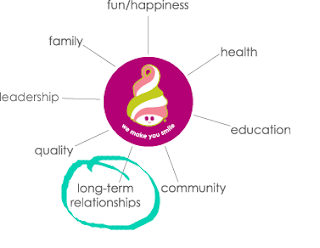 Well, if long-term relationships are part of the Menchie's Mission Statement, maybe it's not such a bad idea.


He sat back in his chair like he was the coolest guy around and I took a good look; he wasn't as hot as his pics (shocking). Maybe it was the fluorescent lighting inside Menchie's, but I started to lose interest fast. After we finished eating, he suggested we go for a walk around the neighborhood. He complained that all the girls who message him online were fat or uglier in real life. Awesome. Thankfully the date ended after only 45 minutes and he didn't even attempt to kiss me goodnight.

I got home and about five minutes later received the following text: