A cute guy messaged me. Geez I really needed that. We messaged online a fair bit, and I was pleasantly surprised with our conversations. His "game" was to send three random facts about each other. I actually thought this was really fun and spontaneous, and it definitely helped spark conversations about each other's lives. But uh oh...he was home-schooled. Yikes. That must be why he's single.

He asked me to hang out on a Saturday night, which happened to be the day of a big fundraising event for work...but I agreed anyway. I was excited about this one. And I know he was, too....because he drunk-texted me on Friday night while out with friends. I worked until the afternoon and came home for a much needed power nap, but we hadn't really finalized plans and I hadn't heard from him since 3pm. Is he blowing me off? Eventually I sent some sort of text wondering what was going on, and he instantly called me. According to him, I wasn't getting any of the messages he'd been sending me. Suuuuuuuuuure. We met in Culver City for burgers and beer. I wore my brand new shoes... 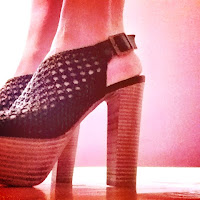 
It was a fun date. I felt really comfortable around him, but also wanted to jump his bones. It's a good combo. We laughed about the failed messages, and I decided he wasn't as socially awkward as I'd expect a home-schooled kid to be. He said he hated first dates, and wished he could skip to the third date where it's less awkward. I rolled my eyes and without thinking asked if that's because that's when you "get it in?" Oh god. Word Vomit. My dating mentor (a dude, btw) always tells not to say anything sexual on a first date. Oops. He was caught off-guard, but I don't think I fully scared him off. Phew.

As he walked me back to my car, I really hoped he'd kiss me. But instead I got a hug next to my car as we stood and joked about his phone still not sending messages. I grabbed and it did a good ol' battery pull...magic. It works now. And instantly the texts he'd been sending came flooding in. Okay, he wasn't lying. And then he kissed me. In the Culver City parking structure. And it was great. Hello, Busy Builder...