Just as I suspected, Sandwich Guy liked me quite a lot. I even had to make up plans for Saturday because he was very eager to see me the very next day after our date. I agreed to Sunday instead. When he suggested he buy us Laker tickets the day of the game because he knew I've never been, I wondered if he could actually pull that off. Oh yeah...I should probably mention now: He makes really good money.

This isn't necessarily something I look for. I have had the misfortune pleasure of mostly dating guys that are broke, still trying to get their shit together. But this was different. Sandwich Guy, at 31, has a well-paying job that he loves (so I don't think I can recruit him to take over my family business, but that's another story) and he's very open that money is never an issue for him. He lives in a swanky beach house in Hermosa Beach, drives a Porsche, and probably spends more money on shoes than I do. Must be nice.

My instincts told me he was a good guy, and frankly I didn't feel like going out, so I invited him over to my house to watch a movie and get Chinese Takeout. I know what you're thinking...It's too soon. He shouldn't be at your house. He could be a serial killer! But I had this guy bouncing the door: 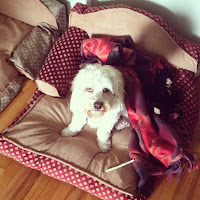 So it's all good.

Key Moment: The food arrives, and I decide to be a "cool girl" and pay for it. I did invite him over to my house, so it seems fair. Bad call. He scolded me for even trying. Sat me down like a little girl and said, "I work really hard in order to take care of my friends and family. Please don't even try to pay for things when you're with me." I remembered that...and you should, too. It will be very important when I reveal what makes him Sandwich Guy.

After a lot of cuddling and Sandwich Guy being TOTALLY open about his feelings for me, "I feel so lucky to have met you. You make me feel so comfortable, like I can tell you anything," I started to worry. This is the kind of guy I should like. He's emotionally available, just like The Aussie, except he actually has his life in order and gets bonus points for being Jewish. But there's something about him that I just can't fall for... I had no idea what it was, but there just wasn't a spark for me. Maybe I can learn to like him?

Labels: My Past, Sugar Daddy, The Aussie, The Sandwich Guy