No such thing as a free sandwich 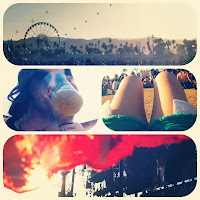 Sunday the shit hit the ferris wheel. We ran out of money again on Saturday, so I suggested we go back to the ATM. When I opened my car door, Sandwich Guy sat quietly. I asked, "Aren't you going to take more money out?" "No. I'll just wait in the air conditioning." ASSHOLE. Look, if I have a boyfriend, I'm all about splitting costs. But what happened to his "I'm not worried about it" statement about money? (-20 points, I can't afford this, and he knows it!)

I really tried to be polite, but he was losing points all over the fairgrounds. I thanked him again for bringing me and he said, "No problem. I got a really good deal on the tickets. They were practically free." Guys: This is called unnecessary disclosure. Girls do not need to know about discounts or "great deals" on items you bought for him. I felt like he just told me my diamond ring was actually cubic zirconia.

We went to eat at a burger food truck and Sandwich Guy ordered us ONE burger to share. As we passed the burger, taking turns on bites, I lost it.
OH MY GOD. I DON'T WANT TO SHARE A BURGER WITH YOU! I WANT MY OWN SANDWICH! WHO SPLITS A BURGER??
Maybe it was the extreme heat and dehydration, or maybe it was just my love of food...Sandwich Guy had officially driven me towards a Crazy Girl Moment. There would be no more sandwiches in our future.

I looked at the time and reminded him that Girl Talk was about to start and I wanted to get a good spot at the Outdoor Stage. All of a sudden, guess who's interested in watching the show at the Sahara Tent (where they play the house music he hates)? Seriously? As I dragged him to Girl Talk, he confessed he had been thinking it was a girl group. At Coachella? Riiiiight.

Somehow I managed to enjoy the rest of the night...thanks to Girl Talk, Florence+The Machine, and the amazing headlining performance of Dr. Dre, Snoop Dogg and their holographic entourage. After being stuck in the mob of dirty hipsters trying to leave the fairgrounds, we finally made it to my car. Yes, I am driving us back to LA at 1:30am. And he didn't even offer to drive my car for me. "You can go to sleep. I'm good." (+10 points for me, because I love being passive aggressive) We barely spoke on the way home and when I dropped him off, I told him I wanted to sleep in my own bed. Goodnight, Sandwich Guy.

Approximately one week later, Sandwich Guy texted me:
"I don't think it's going to work out between us."