After a traumatic first date experience, I decided to be brave and go on another first date just a couple days after crashing my car. Hey, at least this way if he's a psycho killer...he doesn't know my real car or license plate number. Yes, I think about weird shit like that....too much Law & Order: SVU.

This guy was interesting...and a total catch on paper:


He sounded great on the phone until he suggested we go to the Venice Beach drum circle for our date. Ok, I'm all for people watching the crazies in Venice, but it's not exactly romantic. I'd prefer to go somewhere where most people are showered and wearing deodorant.

Instead, we met up at the Getty Museum to see a really cool exhibit about architecture in LA. Wow, he's even cultured! He was pretty cute, but then as he told me he'd come straight a job site, I saw it: 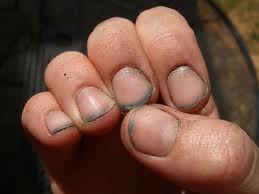 Ick. I tried to give him the benefit of the doubt, but it all went downhill from there...

This is why he's single:
After walking through the exhibit, I was ready to use my..."Well, I should probably get home to feed my dog" excuse, but he suggested we get dinner at the Getty. Yeah, sure, ok... **FREE MEAL** Unfortunately, we ended up sitting super awkward with nothing to talk about. And when I said the food was good, he commented that it was just ok. Time to go home?
NOPE. He wanted to check out the garden...in the dark.
This is about the time he made his move, and I let him kiss me, but his lips were as boring as the words coming out of his mouth. And I was still thinking about the dirt under his nails. Time to go home.

Architect guy called me a few times after that, and I ignored his messages.
Posted by Lindsay at 5:01 PM