Okay, I know you aren't supposed to reach out to your ex, but I missed you guys.

No, I am not interested in getting back together. I'm still happily dating Ron Swanson.

But if you want to creep on us to see what life is like these days...

Please follow my new blog, Throw Me A Bone, for rants (and an occasional rave) about life with dogs.

Thinking of you,
Lindsay
Posted by Lindsay at 8:25 AM 2 comments:

We need to talk. When we first started this thing, I posted every day. I was so dedicated to making you happy...attending to your every need. I showered you with gifts of wonderfully pathetic, yet hilarious stories. And in return, you left encouraging comments and showed empathy to my plight. We have been through so much together. There's been a lot of excitement, some great (and sometimes awkward) sex, and all the usual ups and downs.

I feel like I have been distant lately. I'm not showing you the attention you deserve. Sometimes I want to post, but I'm distracted with other things. And sometimes, I just avoid you completely. It's nothing you did. You've been a great group of readers. Really. It's not you; it's me.

So, it is with great bitter-sweetness that I say, I'm breaking up with you...my readers.

I'm just going to be honest, because you deserve that. There's someone else. Most nights when I should be home thinking of you, I'm out doing fun activities with him. You deserve so much better than what I can give you right now. You don't really want to hear about the awesome birthday present I got, or how cute it is that we both got each other eight Hanukkah presents in honor of his first celebration of this holiday...do you? I didn't think so.

I might come back to you one day. Maybe I'm making a mistake, but I just have to follow my heart right now. I hope you understand.

I'll always cherish our memories together over the last five months. Our relationship was short, but passionate. I hope we can still be friends. 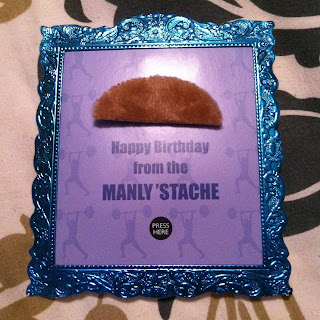 All the women who independent! Throw your hands up at me!

I've been single for a while now.

Well, I've been officially single for about a year. And since I spent all of 2011 in a long-distance relationship, my independence was never affected. When I have a flat tire, I call AAA (or Pinata). When I go to the grocery store, I manage to carry all six of my grocery bags to the house all by myself in one trip. Yes, six bags of groceries for one person. Don't judge me. When I need to reach something on the top shelf, I climb. When I need to open a jar that's really stuck...I swear like a truck driver and bang it on the counter until it opens! "You're mine...bitch!"

Where am I going with this? Well, I've just noticed now that I kind of have someone I can depend on, my inner "independent woman" is resisting a little bit:

Ron Swanson, noticing me climbing on a chair to reach a mixing bowl...trying to balance on my tiptoes: "Need some help?"

Ron Swanson, watching me try to carry my purse, heavy coat, scarf, suitcase, and shopping bag to the car: "Can I carry something?"

Ron Swanson, listening to me scream about the mouse that's been terrorizing my bedroom lately: "Do you want me to come help you, or do you want to just come over here?"

I bet Beyoncé carries her own bag.

What is a Grouper?

The following story is about a new adventure in dating, "Grouper." Though this is a true story, the names have been changed to protect their identity. Credit for the names goes to my amazing girlfriends. Love you, bebes.

So I got this call from my friend -- Angela Sexpot -- asking if I'll be her wing for this dating thing called "Grouper." What the hell is a Grouper? I had no idea. Here's the gist... 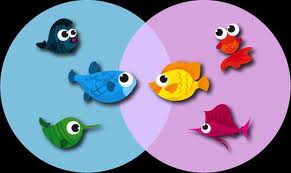 Girl signs up, and gives some chick access to her Facebook, and they stalk the hell out of her until they find a guy they think she'll want to bone date. They pick a time and place, and set up the arrangements. Girl invites 2 single girlfriends. Boy invites 2 single guys. Everyone pays $20 and meets at the bar for their first point of contact.
Happiness, or awkwardness ensues.

You might be thinking...wait a minute. Did I miss an entry? I thought things were going well with Ron Swanson? This is true. But Angela Sexpot invited me before I had met him. I figured I might as well go, hang out with some of my best friends, and have a good story for the blog. (And yes, Ron Swanson knew I went.)

Angela Sexpot picked me up with Bebe Genuine and we pound a warm-up drink before heading to The Corner Door, a little restaurant bar local to my hood. We got there on time, but the guys were not there yet. The manager instantly recognized that we were a group of three chicks and asked if we were there for the Grouper. We order our first drinks, which are included with the $20 fee. The boys were fifteen minutes late before we started planning if we could use their drinks to get a free second round. And then a group of guys walked in... Bebe Genuine's face dropped. Let's just say, they were not cute. And thankfully, not there for us.

Our groupers walked in shortly after, apologizing for their tardiness. They weren't bad looking, either. Chatty Cathy, their leader, got right in and never stopped talking...both to Angela Sexpot and Bebe Genuine. I was sitting next to Miley Cyrus Hair Guy, a surfer from San Diego. We talked about Australia, since he'd lived there for a while. Across from me sat The Wet Sock. He was cute, but SO boring. The boys suggested we go to another bar for a second round...I was hesitant, but decided to take one for the team and go! It's a Monday! Why not get drunk?

On the way there, us girls decided Bebe Genuine would take Chatty Cathy (who was three years younger than us, by the way. What the hell? He knew our friend's little sister). Angela Sexpot would go for Miley Cyrus Hair Guy, and I would happily entertain The Wet Sock. I had all kinds of crazy girl questions prepped.

The boys clearly made a plan, too, because once we got there...the lines were drawn. I tried asking The Wet Sock every dumb question I could think of like,
"What's your favorite Madonna song?" But he didn't bite. In fact, he got up from the table and moved to the other side, closer to Angela. Rude! Miley Cyrus Hair Guy gave me a lot of attention...Uh oh. He bought me a beer. I think he even tried to grab my hair. Uh oh. The girls and I agreed that the bar was FULL of hot hipster guys, and we were with none of them. Fail. Eventually we ended the night, and laughed our whole way home.

Moral of the story: I'm sure Grouper is a great idea. Go out with your friends? Score! But I don't think I'm a fan. I don't like the idea of "competing" with my girlfriends...let's see who wants to talk to us! It's kinda odd. The best part of the night was laughing with my girls. And getting free drinks from guys we never had to talk to again. We win!

My posts may have slowed their pace, but my "relationship" with Ron Swanson has been speeding up. Within a mere month of dating, he's met my family and we've been introduced to each other's group of friends.

And then he said the F word: FUTURE.

To be specific, "I'm excited for our future."

While I am very happy with how things are going, I couldn't help but hear Squints' voice from The Sandlot saying...

I guess it's been a while since this single girl thought about what life would be like as a not-so-single girl.

Thanksgiving Rules for My Mother

A lot of you reading this blog might think it's strange that its #1 fan is none other than...my mother. Yes, I admit it's a little strange to have her reading the details of my sex dating life, but we have a close relationship (and I would probably tell her most of this stuff whether she wanted to hear it or not).

When I accidentally invited Ron Swanson to Thanksgiving Dinner wayyyy too soon in our courtship, I told my mom the news. I'm sure she was more than thrilled -- typical Jewish mother behavior.

Before "the big day," I gave her THREE important rules for meeting Ron Swanson: 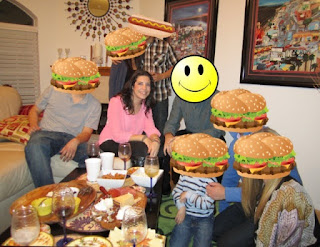 As I went through the rules with my mom, she laughed as she remembered a very similar conversation we had when she planned to chaperone my 5th grade dance. She said I gave her an index card with very similar restrictions. Little did I know, it's been sitting in her nightstand for the last 17 years...

I was nervous as I sat in the car before heading into my mom's house with my newest suitor. But I was reassured by the calm of Ron Swanson. The night went off without a hitch, and I think he passed the family test. And more importantly, my family behaved themselves. And he still wanted to continue hanging out after we left!

I'm thankful for how pleasant it all turned out. And I'm also thankful for my mother. Moms are the best. xoxo